Click here to read the previous post in the series, Part 3: Option A – The Integrated Tech/Data Cooperative

In light of the design and practical challenges that face certain kinds of #platformcoops, we have re-incarnated a traditional private equity strategy that houses different operational functions within separate legal structures. I call this the “TechCo and Co-op Marriage” strategy.

First, we form two separate legal structures, one is a plain vanilla start-up entity structure. If you like Delaware corporations or public benefit corporations, then form that. If you like Colorado public benefit corporations, form that. The purpose of this entity is to house the intellectual property assets that form the tech architecture. This entity will look and feel like a traditional start-up, eminently (almost) financeable with VC and angel capital. This is the “TechCo”.

Second, we form a cooperative (either a cooperative corporation, or a limited cooperative association). The purpose of this cooperative will be to organize and structure governance for the community of users, and to house and own the throughput data; that is the data flowing through the platform. This is the “Co-op”.

Third, we thoughtfully design and build a pre-nuptial agreement between the TechCo and the Co-op. The purpose of this agreement is manifold:

Through this structure, TechCo retains the look and feel of a traditional start-up. Accordingly, it should be financeable to a substantially similar degree; lest the “pre-nuptial agreement” deter a VC from seeing unicorn-scale returns.

This structure allows the Co-op to focus more narrowly on developing the member community, and building the marketplace for the member-created data, content, ancillary revenue from the throughput data. 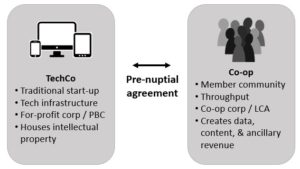