Much of the primary information comes from a lecture by Dr. Jesus Cruz Reyes, on January 13, 2020 in Havana, Cuba. Dr. Cruz Reyes is Cuba’s foremost cooperative economist and is on the faculty of economics at the University of Havana. 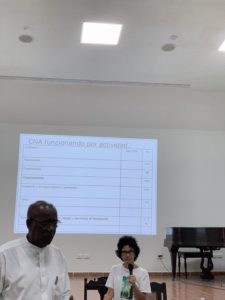 The Cuban “State Enterprise” is undoubtedly the single largest economic consumer and producer in Cuba. Since the 1959 revolution, the State nationalized and has controlled most of the country’s key assets, from land to housing, farms, factories, automobiles, hotels and even workers. Beginning in the 1990’s, when the State realized the defunct Soviet Union could no longer maintain its level of purchasing, the State began a slow and measured transition to non-state enterprise. First, by transitioning control of agricultural production to cooperatives, the State turned over the “means of production”, and not the land, to agricultural cooperatives. Today, cooperatives produce approximately 80% of food consumed or produced in Cuba, from sugar, corn, tobacco, rum, honey and charcoal.

After the fall of the Soviet Union, Cuba entered what is referred to as the “Special Period”, roughly a decade of disruption, scarcity, anxiety and awakening.  Not 40-years into the socialist revolution, Cuba was faced with the demise of its largest economic trading partner and political ally. Herein, Cuba’s Communist Party, General Assembly, and civil society faced the uncomfortable tension of having fought for its autonomy from imperialism (from Spain and then from the U.S.) only to have to rely on the Soviet Union for its basic survival.

By 2000, Cuba’s industry and agriculture had not yet recovered. The Special Period had all but halted economic production. Trade had become woefully imbalanced. Yet, key secondary sectors such as tourism, restaurants and professional services had sustained capacity.  In 2008 the U.S. triggered financial collapse effected Cuba, but not in ways one might imagine.  Revenues from domestic sugar production slowed and were replaced by more extractive nickel exports. Tourism had become more of a primary economic engine since it brought in foreign capital.

As of this writing, there are 403 non-agricultural cooperatives with more than 20,000 members. The vast majority of these are worker cooperatives.

The embargo has choked off Cuba’s potential for consumerism; Cubans can’t buy or import American products and producers in many other countries are too scared of U.S. sanctions to export to Cuba.  Cubans also live on an average of $30 per month…yes per MONTH. Cuba is a largely non-financialized and de-monetized economy. This means consumer cooperatives would have a limited market or offer limited utility to the average Cuban; particularly since the State provides in ways that satisfies most basic needs (housing, healthcare, education, food, transportation).

There are two primary pathways for cooperatives to develop in Cuba.

Non-ag cooperatives are today demonstrating they can provide cheaper and better service (than the State) and create and sustain stronger community linkages. For instance, construction cooperatives are able to donate quality services to healthcare and education centers.

The cooperative sector in Cuba is not without problems, to be sure. Dr. Cruz Reyes opines:

There is reason to be optimistic.

In another installment in this series, I will summarize the 2013 Cooperative Law and the 2019 Cooperative Reform Law.